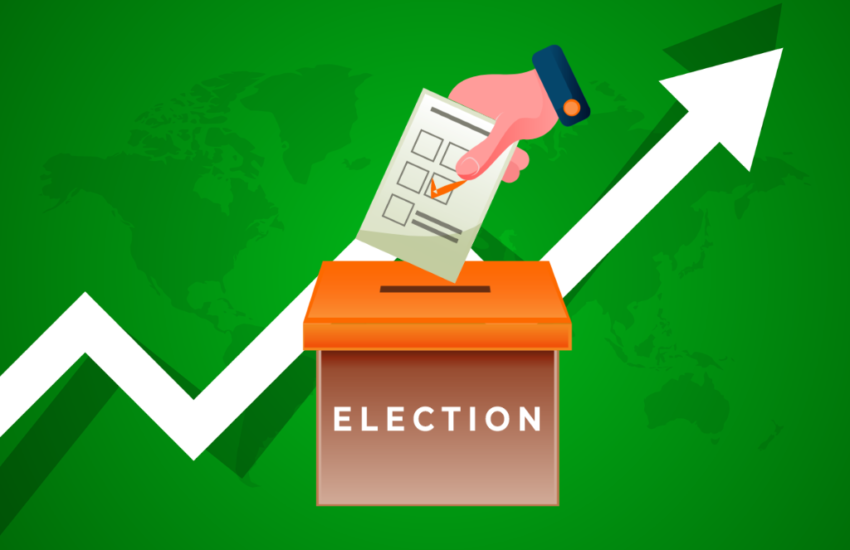 Do you follow the elections in our country? Better yet, have you watched the political news recently? A senior political leader of the current ruling party in Maharashtra shook the entire state with his alleged decision to quit the party. We won’t take the names here, but we’re sure you know who we’re talking about.

If you are wondering whether we have shifted the focus to Politics from investments and the stock market, that’s not the case. Instead, we are committed to educating our readers about investing and giving them a 360-degree view when investing.

Talking about politics, did you know that the general elections impact the stock markets in the short and long term? If not, we have detailed how voting results can move the stock markets here in this article.

While the short-term effects are temporary, the long-term effects are everlasting. So before we understand the impact of the polls on Nifty and Sensex, if you are an adult with a valid voting card, please VOTE! It’s imperative to exercise your right to vote.

What Are The Long-Term Effects Of General Elections On The Stock Markets?

General polls have an impact not only on the stock markets but also on the country’s economy. It’s because the polls mean a possible change in the government. As you are aware, general elections in India happen every five years to select the country’s second most powerful individual, Prime Minister.

Lok Sabha voting, in particular, has everyone excited about new policies or amendments to the existing ones the newly elected government may bring in. When we say everyone, we primarily focus on stock market participants like HNIs, FPIs, DIIs, retail investors, and companies across sectors.

Candidates with different ideologies, policies, and understanding mean differently to the general public, business people, Financial Institutions and investors, etc. Though the ballot results are not linked directly with the long-term growth in the stock markets, the government that assumes power is.

A visionary and stable government is crucial to the country’s growth. To understand how this plays a role, look at two countries – India and Sri Lanka. Both the countries experienced the worst Coronavirus pandemic. But the latter dipped into recession and is now experiencing the worst economic crisis since independence. Our country, India, on the other hand, managed to steer clear of financial adversities.

What Are The Short-Term Effects Of General Elections On The Stock Markets?

A primary mover of the stock markets in the short term is news. An adverse event causes the markets to go down, and a positive event moves the markets upward.

As you must have seen, the news flavors change when polls are around the corner. As a result, the stock markets may become volatile, and the election’s impact on the stock market is unpredictable.

We studied five general poll cycles to understand if Nifty moved in a particular pattern. We considered three-time frames – a month before, during, and a month after the poll results.

The graph below consists of our findings

Findings of The Study

Although for this article, we only looked at how voting affects the Indian stock markets, it’s a global phenomenon. For example, US Bank states that US presidential polls impacted the US stock markets.

Events like general polls, wars, and budget announcements affect the stock markets, but the effects are short-lived for a month or quarter. Long term performance of the stock markets fundamentally depends on how the country’s economy grows over the years.