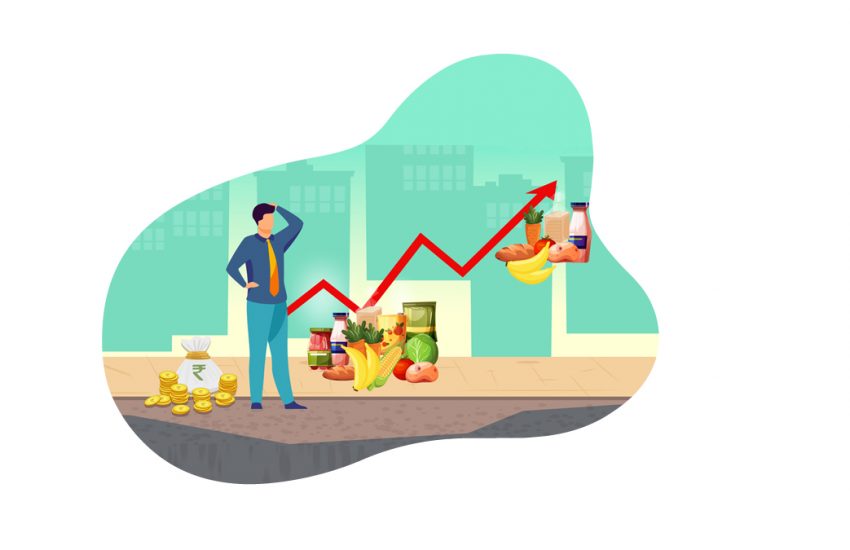 High inflation levels in India captured the headlines across the country on 14 February. As per the Ministry of Statistics and Programme Implementation India’s benchmark inflation rate rose to 6.01% YoY in January 2022.

Inflation for January crossed the upper tolerance level the RBI maintains. This seven-month high inflation rate was due to high food and beverage prices, contributing 43% to inflation YoY and 198% MoM.

Before you panic about rising inflation, you must understand a little more about CPI and WPI.

The Consumer Price Index (CPI) from April to December 2021 was 2.9% compared to 9.1% for the same period in 2020. The decline was led by easing food inflation. However, untimely rains, seasonality, lockdowns, night curfews, and supply chain disruptions contributed to the rise in December.

On the other hand, wholesale inflation based on the Wholesale Price Index (WPI) remained low in the previous financial year but rose sharply to 12.5% between April and December 2021-22. Increased economic activity, a sharp rise in crude oil, imported inputs, and high freight costs raised wholesale prices.

The image above shows the increasing gap between wholesale and consumer inflation. Factors like variations due to base effect, the difference in scope and coverage of the indices, the items covered, and the difference in commodity weights affect the WPI and CPI differently.

WPI is highly-susceptible to imported inputs-led inflation. But as the base effect in WPI wanes, the gap between CPI and WPI will also narrow down.

What is driving retail inflation and why?

Retail inflation may remain high and rise further by the end of the quarter. Volatility in commodity and crude prices are the chief causes of this rise. A surge in Brent Crude prices due to rising geopolitical tensions between Russia and Ukraine, depreciation bias in the rupee, and imported inflation are key risks to inflation in India.

Rise in food prices is a vital inflation driver. Food inflation rose 5.4% in January from 4% in December. The unfavorable base effect led to a rise in inflation, though the food index fell for the second month in a row. Inflation in food jumped 110bp in January to 5.6% because of a 100bp drop in the base period. Price rise for commodities, such as cereals, milk, and vegetables, hovered around 5%, while inflation for pulses and eggs, meat, and fish fell to 3% and 5% respectively.

Expected hikes in the MSP for agricultural products and the depressed base for the last year could mean higher food inflation. Rising consumer goods prices and telecom tariffs are primary reasons for rising inflation. Increasing input costs seem to have pushed up inflation for footwear, clothing, household goods, and services.

Inflation has become a Key global concern raising inflationary expectations and central bank action after the pandemic-led slowdown since 2019. Over 40 countries have raised policy rates by 150bps, while the US may raise 100bps on the policy rate by July 22. But RBI expects inflation to ease considerably in FY23 indicating less pronounced action.

The RBI Governor Shaktikanta Das said inflation in January rose largely due to adverse base effects. But the RBI expects India’s inflation rate to go down to 4.5% below its upper tolerance level at the beginning of the new financial year.

However, economists caution that high inflation is now turning structural, with price rise in non-food segments like clothing, fuel and light, household goods, health, transport, and communications above 6%.

Non-food commodity MRP prices hiked may not be decreased even if the inflation rate falls. With manufacturers looking to pass on their high input costs to consumers, a rise in prices could be on the cards.

What can you expect?

You can expect the retail prices to go up as manufacturers face double-digit WPI inflation.

Look at the graph above. Do you think the inflation rate will rise or decrease as the RBI expects it to in the next fiscal? We will have to wait and see how the drivers of inflation behave going forward.

What do you think of this article?

Write to us at createwealth@researchandranking.com

In the meantime, subscribe to the 5 in 5 Wealth Creation Strategy and start creating wealth.