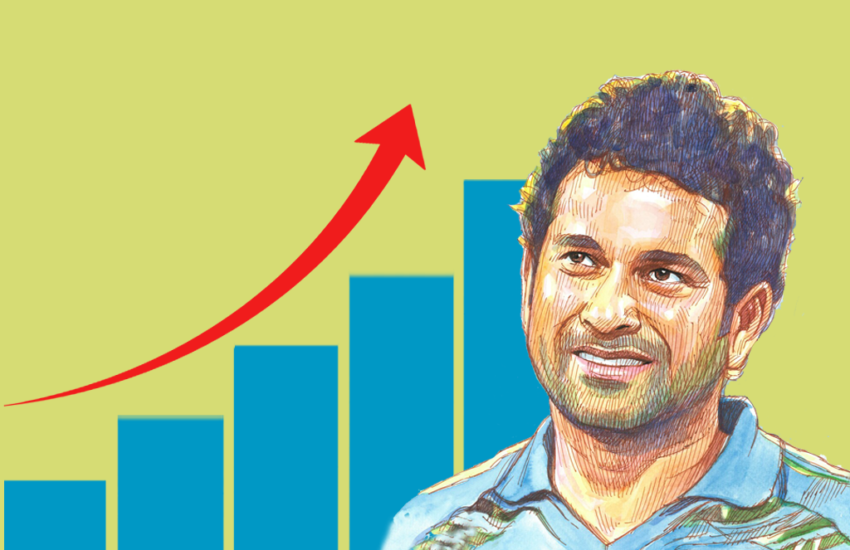 Stock market is closely related to human psychology. It’s a mindset, a habit that you form over time to be a successful investor. To be successful for a long time in any field requires grit, determination, discipline, and persistence. The stock market is no different.

We bring the lessons from one phenomenally successful cricketer. As investors you can learn things by observing the legend of the game – Sachin Tendulkar. He has played the game the longest and to be at that level of success all his career does require serious efforts, patience, passion, and discipline.

Here are seven learnings from his cricketing career that you can apply in your investing journey.

Table of Content
1. Stay in the game for the long term
2. Discipline brings consistency
3. Setbacks are part of life
4. Diversification
5. Have a focused approach and strategy
6. Taking the right decisions at the right time
7. Avoid the outside noise

1. Stay in the game for the long term

Sachin Tendulkar, also known as the ‘God of Cricket’ has played cricket for over 24 years at the highest competitive levels. He is the only player to participate in six World Cups. But   he has won only one of them -his last world cup. Had he given up after losing in the first five world cups and retired, we would not have witnessed the best of Sachin Tendulkar.

We are sure you remember the ‘Dessert Storm’-the highlight of world cricket in the nineties. Sachin tasted success in his early twenties. But he did not stop his extensive practice sessions. He remained disciplined and continued with his regular practice sessions throughout his career. Sachin is known for his strong work ethics and self-discipline irrespective of his actual performance in the match. You must remember that only discipline will bring consistent performances. That’s why Sachin could play for such a long time breaking most cricketing records.

An important learning for you is to be consistent and regular with your investments like a SIP and reap the benefits of compounding returns in the long term. Despite external shocks and surprises, you must stick to your disciplined mindset to select stocks and investment strategy.

3. Setbacks are part of life

There was a patch in his career when Sachin suffered from Tennis Elbow, an injury that put him out of action for a brief time. Even after his comeback to international cricket, he had a series of subpar performances. His injury was so bad that most doctors felt   the injury could end his career. But he did not stop there. He worked hard and bounced back to become the first player to score a double century in One-day internationals.

As an investor, you must know that external shocks and setbacks are part of your investing journey. The IT bubble burst in the early 2000s, the great recession of 2008, demonetization, the Covid-19 outbreak, global wars, are setbacks that will come and leave. Their impact could be temporary or prolonged. But you should not fear such shockwaves. be methodical and stay invested.

Remember that “Every setback is a setup for a great comeback”

Sachin Tendulkar during his career has built businesses too. While he was playing cricket, and becoming the face of the country, he was also endorsing products, starring in advertisements, playing IPL, setting up restaurants. He was not dependent on his primary cricket for bread and butter. He was leveraging and diversifying into other streams of income as well.

As an investor, you must not be dependent on one single stock in your portfolio. It is important to diversify into multiple stocks and categories to mitigate overall portfolio risk. An ideal portfolio allocation would be not over 5% in more than one stock and not over 15% in one sector. A well-diversified portfolio will give you stable returns with minimum risk.

5. Have a focused approach and strategy

In his 24-year=career, Sachin Tendulkar has faced different situations from different bowlers, opponents, to difficult pitches. Only with a robust strategy, planning, and practice, could he face these difficult challenges.

Be it the sweep on the leg side to Shane Warne, or bowling round the wicket or not playing a single cover drive in his long innings of 241 runs not out against Australia on their home turf, everything had a focused approach

Having the right strategy to tackle the market’s difficulties will allow you to sail through the shockwaves. You should have a focused strategy to identify sectors and stocks suitable to the global changes as well.

Sachin Tendulkar is a good reader of the game. He decided to send Mahindra Singh Dhoni to the World cup final ahead of Yuvraj Singh, who was in tremendous form in the World Cup 2011. Not just that, he wisely announced his retirement at the right time and did not stretch it too much. He felt he was doing okay and not contributing his 100% so, he decided to call it quits.

Similarly, your decision to buy, sell, and hold a stock should be timely and based on a robust strategy. Do not stick with a stock even when it is not performing. Exiting at the right time and booking the profits are equally important as selecting the right stock.

7. Avoid the outside noise

Everyone in India know cricket and they become critics whenever Sachin did not do well. Throughout his career, there were critics, noise, and negative remarks about his performance. He did not shy away from giving a strong response to his critics by focusing on his game, strategy, and fabulous playing.

You may hear news anchors and people always having negative views on the investments. You must ignore the noise outside and trust your analysis and research.