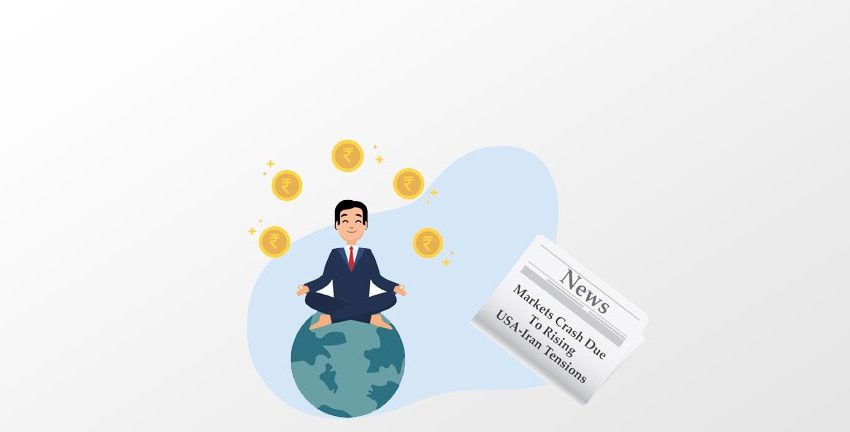 The killing of Qasem Soleimani, Iran’s top military commander on Friday in a drone attack by USA sparked a new round of tensions between the 2 countries and sent oil prices spiralling. Iran has since then vowed retaliation while American President, Donald Trump has tweeted that the U.S. will strike back at 52 targets in Iran \”Very Fast And Very Hard. \”

Indian share markets responded negatively to the entire episode with India’s benchmark indices the BSE Sensex and Nifty falling sharply by over 800 points and 235 points by noon on the first day of the week. If the situation between USA and Iran escalates further, it will be a double blow for the Indian economy.

India imports almost 84% of its crude oil requirements from middle-east Asia. Although India is no longer importing oil from Iran, India\’s biggest oil suppliers in the region include Kuwait, Iraq and Saudi Arabia. Any armed conflict in the Gulf region will impact India\’s oil supply lines, adversely resulting in the need to purchasing oil at higher prices from suppliers outside the area. Increase in oil prices will also fuel inflation in the country, which is currently very much under control.

Any conflict in the region will also affect the jobs of Indians working there and endanger the $40 billion in remittances India receives from the Gulf region, which is a critical source of foreign exchange.

As a share market investor is it time for you to worry?

From a long term investor\’s perspective, there is absolutely nothing to worry as stock markets have seen such situations before and even worse. In the last two decades, there have been several such occasions when tensions have spiked up in the Gulf region and elsewhere with the threat of blowing into a full-scale armed conflict.

In 2019, Iran and USA had been at loggerheads with numerous incidents such a downing of hi-tech American drone by Iranian missiles, suspected Iranian attacks on oil tankers in the region and attacks on Saudi Arabia\’s oil facilities.

The best example of how quickly Indian stock markets recover from such tensions is evident in the below graph.

On 14th September 2019, armed drones struck Saudi Arabia\’s two major oil plants, affecting nearly 50 per cent of the country\’s global supply of crude. A rebel group based in neighbouring Yemen claimed responsibility for the attack. However, USA, an ally of Saudi Arabia, blamed Iran for it, leading to a rise in tensions in the region. Markets reacted negatively to this with Nifty falling by almost 300 points over the week, as the Gulf region was on a boil. However, within a week, the markets not only recovered but touched new highs with Nifty touching 11,600 levels.

Effects of a war, if it happens will be disastrous not just for Iran, but also for the USA which is on the verge of recovering from a slowdown but also many more countries. As of now, only time will be able to tell if the tensions will rise further or simmer down.

But as mentioned earlier, there is nothing for a long term investor to worry. Unlike in the past decades, the Indian economy is now much more resilient and isolated from the impact of global events to a greater extent. Read more about India\’s strengths.The impact of such events like tensions in the Gulf will be a limited one. Just look at the bigger picture and consider this correction as an opportunity to accumulate more of quality stocks at bargain prices. Read more