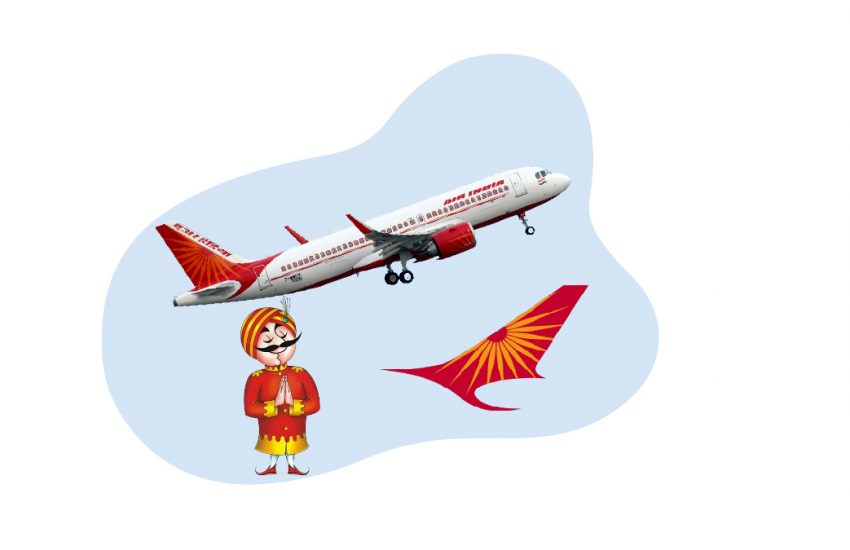 Table of Content
68 years after Government nationalization the Maharajah finds its way back to the TATAs making 8th October 2021 a landmark day for the TATA Group.
The Beginning
The Government Bungle
The decade-long Buyer hunt

The Maharajah finds its way back home to TATAs

68 years after Government nationalization the Maharajah finds its way back to the TATAs making 8th October 2021 a landmark day for the TATA Group.

The TATAs won the bid for 100% share in the national carrier last week. Tata’s SPV Talace submitted the winning bid of 18000cr, beating Ajay Singh’s offer of 15100cr enterprise value. This successful sale of the national carrier is the beginning of the Centre’s privatization plan bringing an end to its 10-year quest for a buyer.

Air India story began in a tiny airfield in Karachi. Then Karachi was still a part of India.  On a balmy morning of October 15, 1932 JRD Tata took off for Chennai in a single-engine Puss Moth plane. It was India’s first-ever private weekly mail service.

1946 saw JRD Tata’s fledgling airline carrying one of three passengers in India while it owned nearly half the 50 plane fleet by that time.

1948, Air India went international, and then it grew, getting a worldwide reputation and recognition.

The government took over Air India in June 1953 despite India’s debt-ridden aviation industry that had too many airplanes and airlines shutting down. The government merged about a dozen airlines of which Air India was the best operator. 75% of foreigners visiting India traveled in Air India by 1968 and it continued to shine till the 90s. Come the 90s and things with the carrier went downhill. Brutal competition and the merger with domestic Indian Airlines in 2007 were further reasons for the downfall.

Since 2008, the carrier has banked on taxpayer-funded bailouts to stay operational. Air India had losses to the tune of ~$ 2.6mn per day with a debt of more than $8bn. Its on-time performance and service deteriorated though it had some of the best pilots in the industry. The carrier has come a full circle and is now back with Tata.

The national carrier was making losses every day and racking up debt since its merger with Indian Airlines in 2007. The government had no option but to sell its stake, which took two decades and three attempts for the carrier to change hands.

Here is a look at the disinvestment plan over the years

Under the Atal Bihari Vajpayee, the NDA government tried to sell a minority stake, i.e., 40% in Air India. Singapore Airlines with the Tata Group were interested in buying the stake. However, they pulled out due to the trade union’s objections to privatization halted the government’s disinvestment plan.

The UPA regime approved a turnaround plan (TAP) and a financial restructuring plan (FRP) for Air India to mitigate the losses.

The Cabinet Committee on Economic Affairs gave in-principle approval for the strategic disinvestment of Air India and five of its subsidiaries. The Centre invited expressions of interest (EoI) to buy 76% of its stake. The buyer would have to take over ~70% of the debts amounting to 33,392cr.

The deal included a 100% stake in Air India Express, Air India’s low-cost subsidiary, and a 50% stake in the ground handling arm AISATS. However, till the end of May 2018, the government did not receive any bids. The chief reasons for no EoIs were the Centre’s retention of 24% of Air India’s stake and too high a debt takeover amount.

The Centre invited fresh EoIs to acquire the airline in Jan 2020 for 100% stake unlike its attempts to sell before. The new deal included 100% stake in Air India Express and 50% in ground arm AISATS.

October 2020 saw a further relaxation in the terms. The government let the buyers decide on the amount of debt they were willing to absorb. The Centre received multiple offers, but they extended the deadline five times till 14th December 2020. The pandemic added to the delay in the process.

The government invited financial bids in April fixing 15th September 2021 as the last date for bid submission. The government received 7 bids. But the government disqualified five bidders as they didn’t meet the requests the PIM/EoI set out despite giving the bidders a chance to clarify.

The Centre received two sealed bids on the due date with non-financial bid documents and bid security from the two qualified bidders – M/s Talace Pvt Ltd, and SpiceJet promoter Ajay Singh-led consortium. The government fixed a final reserve price of Rs. 12,906cr after receiving the sealed bids. The Tatas quoted

The Tatas now have three airlines under their umbrella. The wait begins to see what happens next to the white elephant –Air India. Keep an eye out for our next email in this series. While you peruse this article, consider signing up for the 5 in 5 Wealth Creation Strategy.